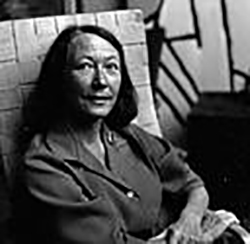 Astrid Hjertenæs ANDERSEN (1915 – 1985) born in Horten (now Borre), in Vestfold County, Norway. She attended a secretary and journalist school for women (Hallings sekretær- og journalistskole for damer). She later worked as a typist and journalist for the Aftenposten, Norway’s largest newspaper. In 1939, she married the painter Snorre Andersen (1914–1979), who later illustrated several of her poetry collections. Her work contained nature poems written to her husband’s watercolors.

Dating from 1942, she devoted herself entirely writing. Her poems appeared often in both Aftenposten and Dagbladet. Andersen wrote early in the modernist direction in the Norwegian post-war poetry. The poems show a clear connection to the symbolism of the past century and were often inspired by music and visual art. A strong personal artistic style, often with the use of free forms, together with the suggestive use of images and symbols, characterize her writings.