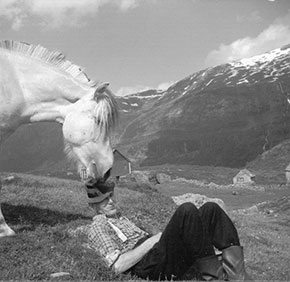 Some poets conquer you at the very first reading itself and you know that they are going to be part of you forever. For me, the great Norwegian poet Olav H Hauge was one of a kind, a rarity in modern literature. I encountered his poetry first in an anthology edited by Robert Bly titled, “The winged Energy of Delight”. Since then I had been waiting to get hold of his poetry collection and I must confess that  my emotions on reading them were ineffable. As Robert Bly says -” Olav Hauge’s flavour is persistent, like the taste of persimmons that we can never forget.” I agree that the tang that even his tiny and taut poems give last for long.

Norway has produced three great poets in the last century  and they are Rolf Jacobsen, Olav H Hauge and Tarjei Vesaas. Their contributions were significant in bringing Scandinavian poetry to the forefront of modern world literature. Like Robert Frost, Olav Hauge led a solitary life and wrote poetry in a country side in western part of Norway. He was born in 1908 and lived all his life on what he could produce from three acres of ground.

He lived in the old pre-commercial gift-giving society and visitors say the richness in his house lay in the handmade spoons and bowls, the wooden reading chair, and book cases to which best poetry from many continents had found its way. Olav was an avid reader and he modestly confesses in an interview that half his life was spent in the world of literature. Thus, working as a gardener and fruit farmer in Ulvik where he grew up, he lived a grand life in the books that he collected and the poems that he wrote. Olav Hauge’s poems are written in his native western Norwegian dialect, conveying by their very word forms both an earthiness and a down-to-earth acceptance of the cycle of life which Standard English cannot transmit in the same way. Yet the translation by Robert Fulton, with its simple, concrete vocabulary, repetition, and straightforward syntax, is as close one can hope to get to the deceptive simplicity of the original.

The above poem is simply sublime as it is about sensitivity and delicateness. The beauty of it is that the poet does it marvelously with concrete images. And it has an amusing and appealing quality too. The poet announces right away what he wants: “Don’t come to me with the whole truth”. The poet then asks us to bring only a “hint” when he asks for truth, and as a model for such discretion, mentions that bird carry away only a few drops of water and the wind takes from the ocean only a grain of salt.   This short, straightforward and tough style is remindful Chinese  poetry, of putting as few words to a phenomenon as possible.

The following is another famous poem in Norway, and in its simplicity it points to something central to each of our particular expressions of existence. A comforting as well as uplifting poem in the sense that each has to tread one’s path in a unique way knowing that even the trail of one’s journey will  be cleaned irrevocably.

Your Way
Translated by Robin Fulton

No-one has marked out the road
you are to take
out in the unknown
out in the blue.
This is your road.
Only you
will take it. And there’s no
turning back.
And you haven’t marked your road either.
And the wind smoothes out your tracks
on desolate hills.

Olav’s  poetry varies in form, from sonnets to short haiku-like poems, and the quality varies as well, but he has written a great deal of poems of simple beauty and usually with a meditative approach to all things small and universal. He is  also a significant voice in the Norwegian geographical landscape too, as he in many ways expresses its grandeur and simplicity, its wildness and purity, and the human feeling of separateness from each other and from nature, while at the same time he transmits a sense of unity with everything and everyone.

It hides its steel
In a silver sheath.
On the edge there is blood

His spare imagery and unpretentious tone ranges from bleak to unabashedly joyous- an intricate interplay between head and heart and hand. Look at this poem in which he lauds the thorns of a rose. I loved this deft poem where the poet finds something truly positive in the apparently negative.

The rose has been sung about.
I want to sing of the thorns,
and the root–how it grips
the rock hard, hard
as a thin girl’s hand.

Sorrow and suffering are essential elements in Hauge’s poetry. It is present at all times, weighing down as well as lifting up, hopelessness combined with an anticipated redemption. Negative experiences are greatly represented in Hauge’s poetry, but they are not the final destination for the poetic self. The sorrow is heavy, and sometimes even paralyzing, but the author brings a movement to the poems where these depressing emotions appear.

For example in the poem titled “Ophelia” , he asks
“Where would we go
If we didn’t have sorrow and death ?”

Black crosses
in white snow
stooped in rain, awry.
Here came the dead
over the thorny moor
with their crosses over their shoulders
and laid them by
and went to rest
under each icy tussock.

The combination of the pure, simple image and the symbolic treatment of the liberation from suffering are almost gothic in its emphasized and clear darkness, where rain, snow and crosses appear together in the above poem.

The dead come walking, they move – come walking with their sorrow, and as such they are used as a personification. Life and death mirror each other. The dead come walking and lay their suffering down, before they go to rest. Hauge animates the inanimate, what is already dead and buried. In this way, even the unmoving sheds a cold light on our lives. Death in this poem is suddenly our own death, as if death is already here. Hauge creates a moving image of how the dead have walked there, perhaps together, like a long file of doomed on their way to the final rest. The poet is absent, like the absence resting over empty space where no one is looking.

Think of Zen poetry of immediate experience, place it in a northern climate and austere living conditions and you have the poems of Olav Hauge. Despite sorrows, many of his poems are radiant with its bright positive outlook to life and future. Consider the following poem.

A newtablecloth, yellow
And fresh white paper
Words will have to arrive,
Because the cloth is so fine
and the paper so delicate
When ice forms on the fjord, we know
Birds do come and land on it
(fjord: a long narrow inlet of the sea between steep cliffs; common in Norway)

His carefree and come-what-may attitude is again beautifully reflected in the poem below.

You Are The Wind
Translated by: Robert Bly

I am a boat
without wind.
You were the wind.
Was that the direction I wanted to go
Who cares about directions
with a wind like that

For the word to be a vehicle of signification seems to be its most important aspect to Hauge. The following  lines from “Prayer” emphasize it
“Open my eyes, Oh Lord,
that I better can gaze
upon the wonder, not only
its outer glaze.”

I wish to end with my favourite poem that I think casts a very positive outlook on life and  with the craving for freedom it expresses,  translates well into any human language. I wish someone had painted a picture with these lines embedded in it so that I could hang it up my drawing room. It is made up of a chain of repetition of the subordinate clause ‘that’ as its key structural component and point of departure. It is interesting to note that this acts as a dominant rhythmical unit in this poem that works through continually adding new elements to it.

At sixty-five, Olav married the Norwegian artist Bodil Cappelen, whom he met at one of his rare poetry readings. He died at 86 in 1994 in the old way; no real evidence of disease was present. He simply did not eat for ten days, and so he died. A horse-drawn wagon carried his body back up the mountain after the service. Everyone noticed a small colt that ran happily alongside its mother and the coffin all the way.