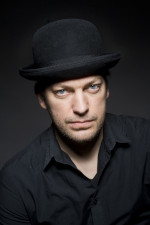 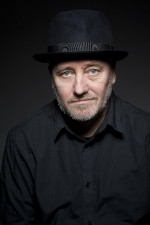 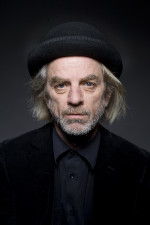 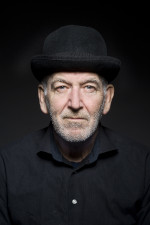 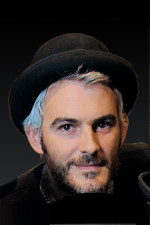 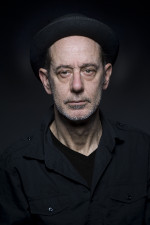 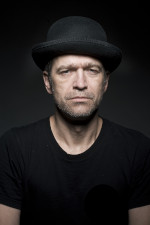 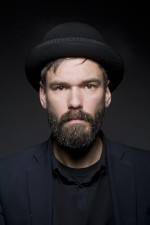 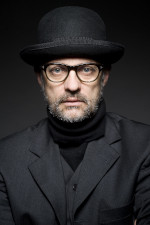 Musican / French
Etienne Bonhomme began playing the drums when he was thirteen. He started with rock, took to playing lots of jazz and, at the age of twenty, came back to rock – and is now moving between different genres. Etienne Bonhomme works for film and theatre, both producing and composing – and has been doing live gigs with artists like Natalia M. King, Claire Diterzi, Mansfield, TYA, That Summer, Dominique A. Musican / Norwegian
Born and raised in Oslo, Hans-Jørgen Bjørnstad has been playing bass und guitar since he was fifteen. His stylistic range is wide, spanning jazz and rock genres. He’s a sought-after studio musician. He’s also been playing in various other formations, such as Øystein Wingård Wolf, Len Hansen, Boots & Balls, The Rest und Tim Scott, sometimes on international tours. Composer / Musician / Vocalist / Norwegian
Founder and Leader of Ljodahått
Born in the suburb of Oslo, next to the forest, is an actor. He sometimes picks up his violin, but is mainly the vocalist in Ljodahått.
He attended the State Theatre School “Ernst Busch” in East-Berlin, joined the ensemble of the Volksbiihne-Berlin in the early 1990’s under the leadership of Frank Castorf that became legendary. He worked with great directors in Germany amongst whom of course Frank Castorf, but also Christoph Marthaler, Dimiter Gotscheff and many others… Today he plays in theaters and films mostly in France, Germany and Norway. Several times with the french film director Mia Hansen Løve. Composer / Musician / Vocalist / Norwegian
Composed a lot of songs for Ljodahått. He plays the accordion (two-row, that he learned in his car in the evenings and nights, not to disturb his family and neighbours), acoustic guitar, piano and is also vocalist. He has played in several bands in Norway, the most important for him was The Tables. He also composes music for the theater and for film Vinterkyss among others in Norway but also for films in France and Germany. He writes, make chimneys and try to take good care of his small new old farm in the south part of Norway.

Grafic Artist / French
Jérôme is not a musician but has always drawn. After 3 years in Fine Arts and a diploma, he joined the illustration section of the School of Decorative Arts in Strasbourg under the mentorship of Guillaume Dégé. Then he went to Paris where he began working for the press and brand communication. He has been accompanying Ljodahått from the very beginning and applies himself to transcribing poetry into images. All the illustrations that present Ljodahått come from the hand of Jérôme. As animated film director, he think his drawings in motion. Since 2015, he has screened his films during the Ljodahått-concerts thus adding another dimension to the group’s lyricism. Musican / Sound Engineer / French
Acoustic GuPhillippe Moja is the sound engineer with Ljodahått. He learned his job by rubbing shoulders with the French music scene of the 1980s. He’s worked with international bands and toured the world. When he met Ljodahått, he took to wearing the bowler hat – and has refused to take it off ever since. Philippe Moja also supports the band as a guitarist whenever he can. Apart from it being part of his job, he likes to mix his pleasures. Composer / Musician / Vocalist / Norwegian
He plays guitar and piano in Ljodahatt. Studied by the conservatory in Stavanger.
Was tought piano by legendary jazz-pianist Ove Hetland.
Vidar is very active in the underground music in Norway and spend a lot of time in a lot of studios. He has been part of many norwegian bands and plays a register of very different sounds. He often participate on film music. Let him find his way to do things, he does. And he is delighted to find out that he got totally lost. Always with a big heart. Musician / Vocalist / Norwegian
He plays the cello in Ljodahått. Educated at the concervatory of music in Oslo, The great teachers and mentors, Marit Klovning, Hans Holgerson and Ørnulf Michelsen gave this kid his solid, musical platform, enabling him to adventure the more raffined registers of the Cello.
During the years, Eirik has contributed as a musician and composer on a wide range of bands and musical projects, and his own electro-accoustic project Fossekallen. Eirik is a musician in constant search of the unexplored and unexpected. He is the youngest of us in Ljodahått and so quick to jump on to a challenge, always with a big smile. Composer / Musician / Vocalist / German
After searching for a musical home for his skills in playing the english concertina for almost half of his life (an almost forgotten, rarely played instrument with the largest musical potential compared to its tiny size no bigger than an average bowler hat), he by chance – or should we rather call it fate? – crossed the intricate pathof the Paris-based Norwegian actor Magne Håvard Brekke in a production of „Romeo and Juliet“ at the public theatre in Frankfurt. He was immediately willing to join in a musical adventure Magne Håvard was about to give birth to, even if the latter forced him to also play – next to his concertina – the trumpet, the alto horn (another of his underestimated instruments, by the way), the jew’s harp (well…), to sing and even to compose songs. This musical adventure was supposed to be called LJODAHÅTT.